We are continuing our collaborative math journey. Today students were grouped into teams of four and assigned a role. As a team, they were required to solve a financial mathematics problem. The four roles were; Tables Guru, Sum Constructor, Solution Finder and Quiet Observer. I ran four rotations using these roles so that each participant was able to fulfil the job description.

Our students who were more confident completing the task became our Bartec workers and bankers. They individually had to solve the same problems, mark the groups work and give change.

After the session, we came back together to reflect on the task. Students noted that they were able to pinpoint where they made errors such as forgetting to carry and writing the sums out incorrectly. The hardest role they had was the quiet observer. One student noted that he could see an error, but he needed to leave his teammates find their mistake. 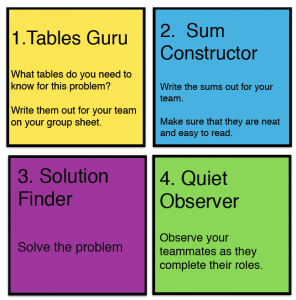