One of my biggest goals after returning from EduTech 2015 is to provide more hands-on activities in the classroom. Well, today we did just that! 5SK were given the task of solving a real-life math problem in small groups. Not only that but they were also asked to present their answer via video to the class. Were they excited? YES! Were they nervous? YES!!

They broke into groups and brainstormed what they would need to know on the left side of their chart. 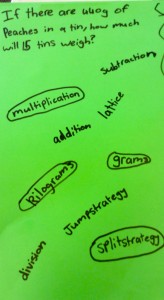 The next step was to decide on the best strategy to solve the problem. It was interesting to see their choices. Three out of the four groups chose Split Strategy. The final group went with the Lattice Method. They solved their problem together on their rough draft and then repeated the process for their video.

We came together at the end to watch the videos. By then the nerves had eased, and the students were eager to watch. 5SK’s videos were quite good for their first attempt. In our next filming activity, we can see where we can improve. (Not filming around bell time)

One positive aspect watching the videos is that we could see areas that needed a little tweaking like putting the measurement on the right-hand side and multiplication order. One group added thought bubbles and a second operation to check their answer which was a great idea. Overall it was a great experience that we will use more often.